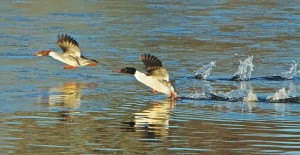 Birdlife: In early spring you will see sand martins, the first of the returning summer migrants, hawking over the water. These birds nest in holes on the steep sandy banks of the River Annan and the hugely successful artificial wall at Applegarth and come daily to feed on the insect-rich air above the still waters of the loch. They will shortly be joined by swallows, house martins and swifts, all of which nest locally in Lochmaben. Some passage migrants may also appear at this time, with large flocks of northward heading curlew using the surrounding fields. In May, there may be an occasional visit from one of the tern species or a garganey.

A considerable number of water birds breed at the loch, with great-crested grebe, shelduck and greylag goose accompanying the more common mallard, mute swan, coot, moorhen and Canada goose. Reed bunting, reed warbler and sedge warbler, all breed in the reedbeds that fringe large parts of the loch. Over thirty species of bird breed regularly in the surrounding woodlands from common species such as the chaffinch, robin and wren to treecreeper, willow warbler and five species of tit. The willow tit, which is a scarce resident of the region and near the northern extent of its range here, breeds regularly at the reserve. It builds a new nest each year by excavating a hole in a rotten stump or branch of a tree.

During July and August more than a hundred mute swans arrive at Castle Loch to moult. Swans, like most waterbirds, moult synchronously which means that they undergo a flightless period immediately after the breeding season. At these times they tend to group together for safety in larger areas of water where the risk of predation is reduced.

Mallard are present all year but are most numerous in late summer and autumn, when, they too, are moulting. A flock of around one hundred and fifty Canada geese is regularly present on either Castle Loch or Kirk Loch and coot and tufted duck are present in double figures for most of the year. Teal numbers increase when the water levels are high but there are usually some to be seen in the reedbeds at the south end of the loch. Small numbers of moorhen can be seen busily bobbing around the edges of the loch at most times of year.

If you visit during early autumn and water levels are low, check the exposed areas of mud around the shore for passage waders such as dunlin, redshank, greenshank, common sandpiper and snipe. If you are really lucky you may spot a ringed plover, green sandpiper, spotted redshank or ruff. It is worth also keeping an eye out for little gulls and common, Arctic or black terns which occur from time to time.

In winter, goldeneye, small numbers of pochard, and a flock of goosander will usually be present. The goosander flock has reduced in size over recent years but is beginning to build up and may soon attain nationally important numbers once again.  Smew are seen in single numbers almost every winter and pintail, shoveler, gadwall and long-tailed duck  occasionally visit.

The goose roost is a shadow of its former self but a winter visit at dawn or dusk will be rewarded by views of the jackdaw and rook roost in the castle woodlands. There is a starling roost in the reedbeds on the western shore and a mixed gull roost, of largely black-headed and common gulls, that is growing annually and occasionally contains a rarer gull.

Winter also produces mixed flocks of tits moving through the woodlands in their day-long search for food. These mainly comprise blue and great tits, with smaller numbers of coal and long-tailed tits. A careful scan will often reveal a willow tit as well as some goldcrest, treecreeper and wren in these highly mobile groups. A search in the tops of the alders may produce flocks of siskins and lesser redpolls while the beech trees near Lochmaben Castle can sometimes draw a few bramblings in a good mast year.

The most commonly seen raptors are the buzzard, sparrowhawk and kestrel, all of which breed here. Peregrine, merlin and marsh harrier have all been seen at least once this century and visits by osprey, though still rare, are becoming more frequent. Tawny owl breed at the loch but, apart from a single barn owl record for a few months in 2009 no other owls have been recorded here in the twenty-first century.

Finally please consider helping to protect the wildlife at Castle Loch by submitting records of what you see. This can be done by sending records to slioch69@aol.com; by texting your sightings to 07792-142446; or by downloading, completing and then returning the record form (see Nature Reports & Recording page).

If you are new to identifying wildlife then why not come on one of the free ID days that take place at Castle Loch from time to time (check the Events page).